The announced rise in the Bank Rate of 0.15 percentage points to 0.25 per cent from the Bank of England today may leave consumers speculating how this increase will affect their most significant outstanding loan: their mortgage. With the average homeowner having approximately £140,000 of their mortgage outstanding as of June 2021, it is important to understand who will most likely be affected by this news and by how much.

Chart 1: Relationship between the Bank Rate and mortgage rates 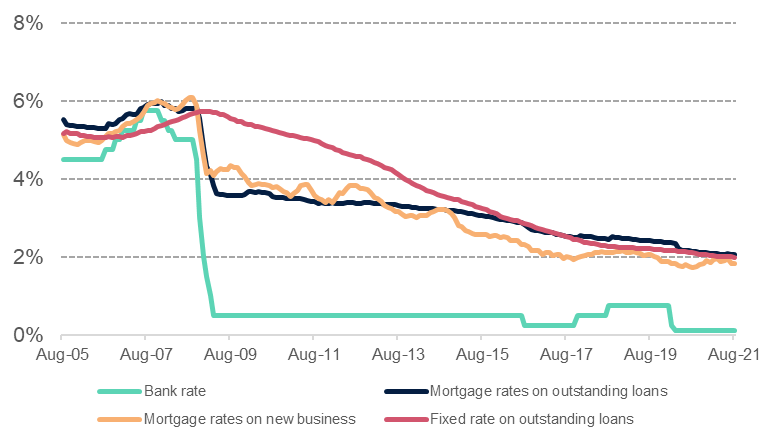 As shown in Chart 1 above, recent history tells us mortgage rates have declined gradually to near-record lows while the Bank Rate has remained largely static. For the few modest increases in Bank Rate over 2017 and 2018, mortgage rates did not rise by the same margin and returned to their gradual downward trend shortly after. Strong market competition and ready supply of wholesale funding have been important drivers in keeping rates low.

This rise in the Bank Rate is the smallest since 1989, so even if mortgage rates move more in line with Bank Rate than has been the case in recent years, the effect on mortgage rates will be commensurately modest.

Chart 2: Proportion of new homeowner mortgages taken out on a fixed rate 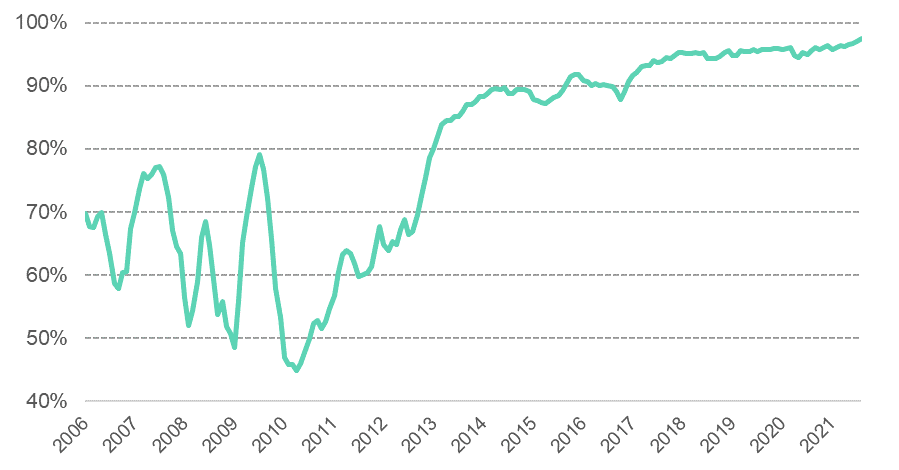 For most mortgage borrowers, the change in the Bank Rate will have no effect on their mortgage rate in the short term. Currently, 74 per cent of homeowner mortgages are on a fixed rate contract, with 96 per cent of new borrowers choosing this option since 2019 (as shown in Chart 2). Therefore, a sizeable majority of borrowers will see no immediate increase in their monthly repayments.

Mortgage rates have continued to decline in recent years despite little movement in the Bank Rate, in large part due to continued thriving competition in the mortgage market.

The rise in the Bank Rate to 0.25 per cent will not affect nearly three quarters of all mortgage borrowers in the short term, and this will extend into the medium term for the significant volume of borrowers locked into longer term fixed rate products. While approximately two million borrowers on variable rates will see their monthly mortgage payments increase in the short term, these increases are likely to be very modest with rates expected to remain historically low overall. 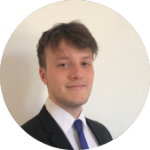